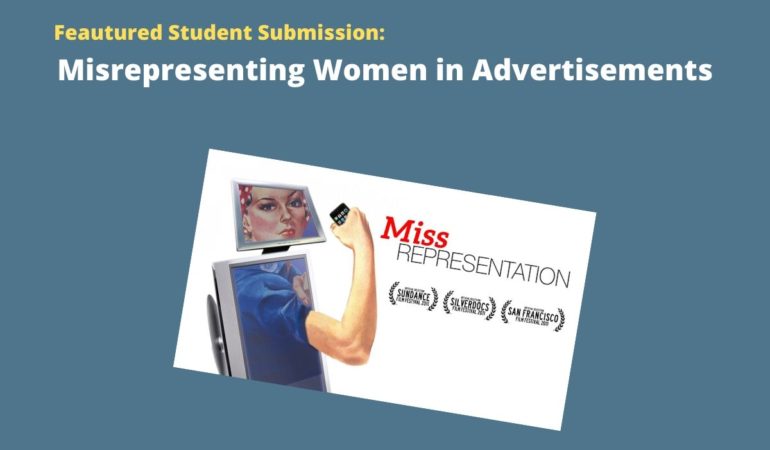 We are living in a world where men, all of civilization and advertisement industries don’t give women any respect. Many documentaries such as Miss Representation talk about these types of issues about women in the advertisement industry and the negative effects that come in to play. There are many ads that have failed to treat women fairly and this has affected the well-being of all women in this business.

The portrayed gender roles of females and males in contemporary society have changed positively and negatively. We live in an era where stereotypical advertisements with men and women formulate skepticism within viewers who see these images, to create doubt about how they physically look.

Advertisements disseminate gender stereotypes that disempower women by portraying them as victims and objects. In magazines and documentaries, men are frequently displayed as dominant figures in advertisements. Women who see advertisements featuring skinny bodies may negatively alter their relationships with men when seen in current-day society. There are concerns that revolve around all women today which incorporate self-esteem issues and other health problems that can be aggravated in the everyday life of a woman. They are generally misrepresented by advertisements as incapacitated figures and sex objects who are vulnerable and unable to take care of themselves.

The unfortunate part of women living in this judgemental society and being in the ad industry is that they are extremely sexualized in advertisements; images commonly objectify their bodies and even imply domination by men. There is a huge concern that graphic sexual images appear to be more extreme and disturbing than ever before. Women are only depicted with portions of their bodies, like their legs or their chests, while men normally have their faces showing. This exposes the fact that there is only one reason the woman is modelling the item; it is the assumption that the shape of her body, or even just a part of her body, will sell the product. The depiction of women has not developed much, except for the involvement of sexual and more dramatic imagery. These images may influence the way modern society, and men, in particular, view women. Instead of fostering professional and respectful conversations towards women, people are encouraged to take advantage of women and make unsolicited sexual advances towards them just because of the ads they have viewed. Many of these advances have prompted women to be the victims of sexual assault, abuse and rape. This negatively affects how women view themselves and can result in self-esteem issues which can lead to depression and suicide.

Many people who have witnessed advertisements know the way in which the images are produced. The advertising companies do have a tendency to promote women as sex objects, with complete disregard for their emotional well-being. Men’s bodies in advertisements are portrayed as muscular which makes them look powerful, and their faces are usually featured, which also grants them the power of identity. In contrast, women are shown as delicate, which can suggest weakness, and their faces are not included, which serves to dehumanize them.

The concerns of the portrayal of women in advertisements have been occurring for a long time, more so in the advertisement industry as well as in today’s society. These issues of the discourtesy that women are receiving are not acceptable and should be resolved quickly. Women in the advertisement industry are told what to do and how to act, but what individuals don’t realize is that women have more potential they could ever realize. Women are capable of way more than being people’s puppets.