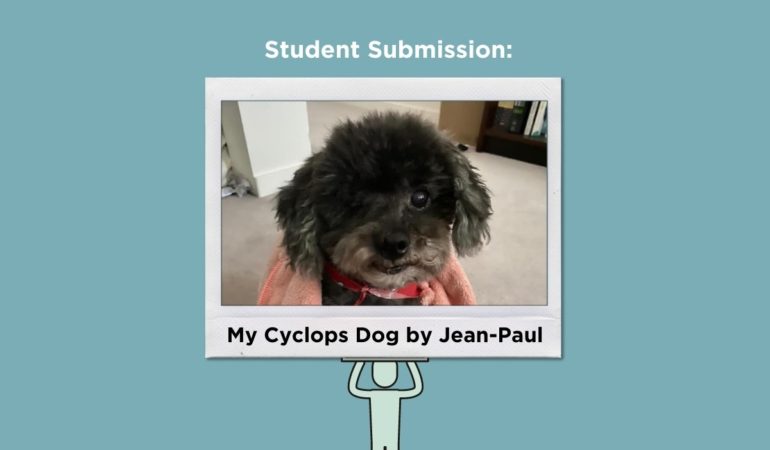 Student Submission by Jean-Paul for English 9

I woke up, brain immediately on alert, I knew what my goal was, I knew how to achieve it. I instantly got up, put on my glasses and the nearest pair of socks, so my feet didn’t have to touch the cold floor. Bursting out of my bedroom, faster than anyone had ever seen before, I zapped down the stairs as quick as the flash. I found my parents wearing warm sweaters and the cheapest Santa hats on the market. They were drinking hot chocolate and tea in front of the fireplace and wished me a good morning. I gave them the quickest and least thoughtful greeting back because I had no more time to waste. After the whole journey in which I had embarked on I had finally reached the treasure. Behind my parents was where it stood valiantly, the Christmas Tree. It towered over me with a grand height of 8ft. I was mesmerized by how beautifully it was decorated. Decked in red and gold and hand-crafted ornaments it was truly a sight to be seen however, I had already seen it before and it was not what I had come for. Though I will give it credit for capturing my attention for a brief moment, that is not what I had come here for, instead of the top, I was more interested in what was under the tree. I caught my mother glancing at me over my shoulder, she pointed to a spot under the tree in which I realized was empty yesterday, this time there was a large lidded rectangular box wrapped in festive red and green wrapping paper and a gold bow on the top. I couldn’t hold back and immediately dove down to open it, when I heard a faint whimpering. I was unsure of what it was or where that came from but my mind immediately thought it was just my dad who was making some weird sounds as he usually does. I picked up the box and felt moving? wobbling? I was startled and almost dropped the box, but as soon as I had come to my senses I ripped the lid of the box and tossed it to the other side of the room. I looked down and saw two tiny little black eyes staring back at me! I almost dropped the box again! It popped out and only then had I realized what was looking back at me, a tiny little black poodle. I whispered to my parents, “For me?”, in which they both nodded their heads up and down, then said to me with big smiles on both their faces, “Merry Christmas!”. I picked it up and held the little black fluff ball in my arms. It’s small black nose, silky soft fur, and most importantly it’s cute little beady eyes. I couldn’t handle the cuteness overload. My father asked me, “So, what are you gonna name it?”, and I already l knew my answer, Natsu.

I woke up to licking on my face, this was not the first time that this has happened, in fact this has been my daily routine for the last eight years! My 7th Christmas was the best ever, after my parents gave me Natsu who I named after my favourite anime character, I’ve become even happier as he’s been my closest companion ever since he popped out of that box. He follows me almost everywhere and loves joining me with my activities! He was there with my parents for my first day of grade 1 and even when I graduated elementary school in grade 7. I feel bad whenever I have to leave him to go to school or any other places but he always waits by the door for me to get back. It’s already been many years with him and we’ve both grown much older. He would help me with gardening in spring, went to the beach with me in summer, played in piles of leaves with me in autumn, and ran around in snow covered fields during winter. He was always there for me, when I felt down he would cheer me up and when I was tired he would give me energy. When I was sick for a whole year he stood by my side the entire time and these days especially, as he nears the senior age for doggies, I do my best to make sure he knows I would do the same for him too. Even as he enters his elderly years he still fills my arms with his soft fur, cute little nose, and those adorable beady eyes. I would never spend so much time with anybody else!

I woke up, within seconds I could already tell something was wrong. Why was there no licking on my face? I didn’t want to get ahead of myself so I called out his name, “Natsu? Naaatsuuu!”. No response. “Natsu, are you here?”. No response. I panicked and drew my curtains to let in some light so I could see where I was going and right behind me I spotted Natsu, lying in the corner of my bedroom looking absolutely lifeless. I was still trying to comprehend what was going on, I quickly examined his body and gently lifted his head trying not to hurt him in any way. He whimpered and slowly opened his eyes, I was completely astonished to see that his once beautiful round, black, beady right eye was covered in a grey, foggy, cloudy looking substance. I called for my parents and we instantly drove to the vet after I told them what had happened. The ride to the vet was miserable, I was stuck with my best friend lying listlessly in my lap. I held him and rubbed his soft fur, saw his cute little nose but wrenched back when I knew there was no longer a pair of round black eyes. The vet brought Natsu into his office where we sat anxiously in the waiting room. After almost one hour and thirty minutes the vet finally came out of his office with Natsu, I was terrified to see what my doggy was going to be diagnosed with. The vet tried to calm us down before he announced that my furry friend had glaucoma… I had absolutely no idea what that was but the vet soon explained to us that it was damage to the optic nerve. He then made sure that we were prepared for what he was about to say next, Natsu had to get his eye taken out.

I tried to wake up, hoping that this was all a dream, but no, this was really happening and Natsu was going to have his eye surgically removed in less than a month. I couldn’t believe what I was hearing. The vet had to console me because my feelings were so shattered. My brain wouldn’t allow me to process any of this. I was completely torn.

I was hugging my mother tightly as it was the day. The day of his surgery, and there was no waking up this time. Not only would Natsu have to lose one of his beautiful eyes but there was also a chance that he wouldn’t make it back at all. My father had already sent him to the vet as his procedure was starting soon. I tried my best to hold back my tears but they just kept streaming down like a dam that had been completely broken. I was so scared of the unknown, I kept running over all the possibilities of what might happen after tonight in my head. It had already been weeks since I knew that this had to happen but in my head, I was still not prepared. I kept blaming myself for this when in the end I had no control over it. I stared at the wall while listening to music with my headphones on to distract myself because I knew that by this time, it had already begun. In only a couple of hours would I get news of the outcome. In just this span of time he might not even be alive anymore, but I tried to prevent myself from thinking about the negative thoughts. After a while, I got up and sat with my parents who were just as sad and fearful as I was, however we managed to help each other and pull through in the end.

The phone rang, the time had come. We were about to find out what had happened during the procedure. The vet was ecstatic to be able to bring us good news! Natsu had made it out alive! Unfortunately, there was some bad news as well. We were notified that Natsu’s heart had stopped beating during the procedure and they had to use everything they had to revive him. They clinic said they rarely do that on old dogs as it almost never works, Natsu being the first one to ever prove them wrong. Though he made it out alive, he still was in horrible shape and the vet gave us the choice of to leave Natsu at the clinic so that there would be a person who could help him in the high chance that he would go into cardiac arrest or bring him home so that if anything were to happen to him, that Natsu would be able to move onto the next world with the people he loved who loved him just as much back. We came to a consensus that it would be better to bring him home, for Natsu and for the rest of us as well. We laid him on my parents’ bed where he would lay there, still like a corpse. We took turns during the night to make sure he wouldn’t move too much so that his stitches wouldn’t burst and to calm him down when he was having spasms. Everytime it was our turn to watch over him, tears would fill our eyes as we looked at our beloved dog with the soft fur, black nose, and once a pair of beautiful black eyes. He cried and whimpered all night, emitting a horrendous odor from his wounds, but we were all committed to making sure he made it out alive.

The morning came, I was already awoken. My parents and I knew, and wept once more, for he had made it.

It’s now been months since the surgery of Natsu and even though it was a long and different recovery he is alive, happy, and well. I find him walking into way more walls than when he had both eyes, but it’s not a big deal so I’m sure he’ll be fine. Sure, it put us through a lot of emotional and mental stress, but it was worth it as he is now very happy and we are more than grateful for him to be alive. While he may not have those beautiful pair of eyes that once stared at me from inside a box years ago, no matter what happens I will still hold him in my arms with his soft silky fur touching my skin, his small black nose that I love to boop, and his magnificent black, beady, marbly, cyclops eye.