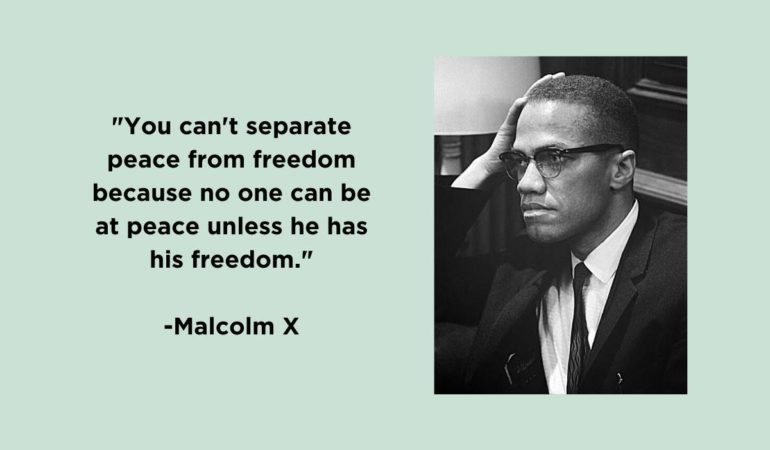 “You can’t separate peace from freedom because no one can be at peace unless he has his freedom.”

Malcolm X was one of the most significant figures during the civil rights movement. He is well acclaimed for being the vocal spokesman of the Nation of Islam and is widely regarded as the second most influential leader of the Nation of Islam, just behind Elijah Muhammad. He was credited with the dramatic increase in the group’s membership between the early 1950s to the early 1960s. The above quote is one of the most well-known quotes by Malcolm X. According to him, peace and freedom cannot be separated because no one can be at peace unless he or she already has his freedom.

I agree that “You can’t separate peace from freedom”. Indeed, these two are always related to each other and it is hard to separate them. However, most of the time peace actually comes before freedom. For example, many countries in the world today are peaceful, however, the people in these countries may not be completely free. North Korea is a prime example of one of these many countries. The government of North Korea doesn’t give its citizens the freedom to vote, which is why I don’t agree with the second part of the quote.  Malcolm X claims that “no one can be at peace unless he has his freedom”. Many people that don’t have the freedom to vote are still at peace, they still live peacefully despite not being completely free.

On the contrary, people who are free may not actually have peace. For example, in some war-torn countries, such as Iraq, many people are theoretically free, because there is no [stable] government or laws to regulate them, yet most of them are not at peace. And also they are technically not free because there are other factors that are restricting them. Most of the people in those countries would probably rather exchange freedom for peace. Unlike what Malcolm X said “no one can be at peace unless he has his freedom”. Although I certainly agree with the first part of the quote, I do not agree with the second part. Peace and freedom are related but peace usually comes before freedom.